Can You Miss the Earth? 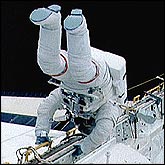 Have you ever wondered why astronauts float in space? Well, it isn't because there is no gravity in space. Astronauts float because they are in constant free fall. If a baseball pitcher throws a ball perfectly level, a few feet above the ground, and another person drops a ball from the same height, both balls will hit the ground at the same time, neglecting any effects caused by the air. The lateral velocity of the pitched ball does not affect the amount of time the ball is in the air.

Now, imagine this pitcher is a very talented guy, and can pitch the ball faster and faster. As the ball is given more velocity, it travels farther over the Earth's surface. When it starts to fall, it traces a parabolic, or curved path. But the Earth's surface is curved too. As the ball falls, the Earth's surface curves away from the ball. Eventually, he can pitch the ball so hard that it falls and falls, but misses the Earth. At this point, the ball is in orbit, or free fall. The ball is just falling and falling. An object can orbit the Earth at any altitude provided it can be given enough velocity. The higher you go, the less velocity you need to stay in orbit. There are geosynchronous satellites that orbit Earth at 35,900 Km (about 22,500 miles) above the Earth on the equatorial plane with a rotational period that matches the Earth. That means that if there is one stationed over LA, it will be over LA during any time day or night. Communication satellites are in stationary orbits, with three or more spaced around the orbit to give worldwide coverage.

When astronauts orbit the Earth, they are simply falling, but missing the Earth. Astronauts look as if they are floating, but they are actually in orbit, falling continually at 17,500 MPH (about 28,000 KPH)! You know that feeling you get in your stomach when you just crest the hill on a roller coaster and start to descend? That is temporary weightlessness, when your stomach is not feeling the force of gravity. And yes, astronauts feel that every second they are orbiting, or missing, the Earth!