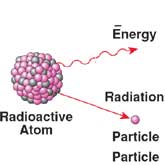 Many of the known elements from which our universe is constructed exist in various isotopic forms. The identity of any particular element is defined by the number of protons within the nuclei of its component atoms. All atoms with exactly six protons in their nuclei are thus identified as atoms of carbon, while all atoms with exactly ninety-two protons in their nuclei are defined to be atoms of uranium. Protons bear a positive charge, and since like charges repel each other, one might wonder how there can be more than one proton in a nucleus without that nucleus pushing itself apart as the protons try to get away from each other. Obviously, some type of 'nuclear glue' is required.

The role of nuclear glue is played by a subatomic particle known as the neutron. Neutrons are, as the name might suggest, electrically neutral. Their effectiveness in stabilizing polyprotonic nuclei is well evidenced by comparing the atomic structures of the two simplest elements, hydrogen and helium. The hydrogen atom consists of a single proton surrounded by a single electron. This is the most common element in the universe by far, and ostensibly the one from which all other elements in the universe have been made within the great nuclear fusion reactors called stars. Helium is the product of hydrogen fusion. Atoms of helium contain two protons and two neutrons, surrounded by two electrons. Rather than being destabilized by the presence of two protons confined within the space of the nucleus, helium atoms are so stabilized by the two neutrons that this element is the most stable, unreactive element known.