What Give Batteries Their Charge? 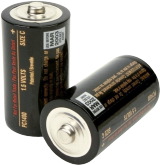 There is in chemistry only one function that is of fundamental importance: the ability of atoms to share electrons. In any such sharing program, there must be electron donors and electron acceptors. In a great many compounds, all the atoms involved simultaneously donate and accept electrons, and everybody is happy. But each type of atom known has its own unique atomic structure that imparts uniquely different abilities to donate or accept electrons. The extent to which an atom is indeed sharing its electrons is referred to as its 'oxidation state'. When an atom undergoes a change in which it accepts more electrons, its oxidation state is reduced, When the atom gives up more electrons it is said to have been oxidized. The movement of electrons from one location to another defines an electrical current, and the force with which the electrons move is the electrical potential, or 'voltage'.

In practice, bringing two materials having different oxidation and reduction (or 'redox') potentials into contact with each other results in a flow of electrons from one to the other. Anyone who has ever managed to bite down on a piece of aluminum foil has felt the effect of the electrical current produced when the aluminum came into contact with an amalgam filling! This principle is the basis of all electrical batteries. In a battery, the two different materials are isolated from each other in such a way that they can only come into contact through an external means such as a wire or the circuits within a battery-powered radio, flashlight, remote control, or whatever the batteries are being used to power. In small batteries such as AAA, AA, C, D, and 9V batteries, one of the materials is sealed as a thin layer between two sheets of insulating material. The resulting 'sandwich' is then rolled up around a thin layer of the second material to construct the inner portion of the battery.

The structure is made so that one material is accessible from one end of the battery, and the other material is accessible from the other end of the battery. The material that will give up electrons is thus made into the 'cathode' or 'negative' terminal of the battery. The other material forms the 'anode' or 'positive' terminal of the battery and will accept the electrons given up by the cathode. When the two terminals are connected to each other through an electrical circuit, the two materials can behave as though they were actually in contact with each other, and electrons begin to flow from the cathode to the anode. It is interesting to note that all A, C, and D size batteries produce electrons through a redox process having a potential difference of 1.5 volts. They differ only in the number of electrons they can transfer in a given time, which is the electrical current that they produce.