What Is A Mole? 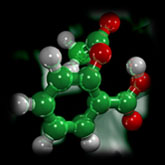 No, it's not the furry little burrowing rodent with the star-shaped nose, from 'Wind In The Willows'... In chemistry, a mole is strictly defined as the number of particles of a pure material equal to the number of atoms in exactly 12 grams of carbon-12. This is the standard convention used by chemists throughout the world.

It is no accident that the mole and atomic mass are based on the same element. This was done to harmonize definitions so that chemists everywhere work with the same standards. A third feature can be added to further standardize the definition. This amount of carbon-12, exactly 12 grams, is said to contain exactly the number of particles (atoms in this case) equal to Avogadro's Number, that being 6.02252 X 1023. Because of this standardization the terms 'mole' and 'gram molecular weight' are used interchangeably. A gram molecular weight (or gram atomic weight when speaking of elements and single-atom structures) is the weight of the material in grams that corresponds to the molecular (or atomic) mass of the material.