by CDC Centers For Disease Control 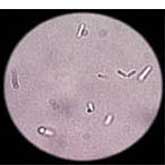 Clostridium botulinum is the name of a group of bacteria commonly found in soil. These rod-shaped organisms grow best in low oxygen conditions. The bacteria form spores which allow them to survive in a dormant state until exposed to conditions that can support their growth. There are seven types of botulism toxin designated by the letters A through G; only types A, B, E and F cause illness in humans. In the United States an average of 110 cases of botulism are reported each year. Of these, approximately 25% are foodborne, 72% are infant botulism, and the rest are wound botulism. Outbreaks of foodborne botulism involving two or more persons occur most years and usually caused by eating contaminated home-canned foods.

Botulism can be prevented. Foodborne botulism has often been from home-canned foods with low acid content, such as asparagus, green beans, beets and corn. However, outbreaks of botulism from more unusual sources such as chopped garlic in oil, chile peppers, tomatoes, improperly handled baked potatoes wrapped in aluminum foil, and home-canned or fermented fish. Persons who do home canning should follow strict hygienic procedures to reduce contamination of foods. Oils infused with garlic or herbs should be refrigerated. Potatoes which have been baked while wrapped in aluminum foil should be kept hot until served or refrigerated. Because the botulism toxin is destroyed by high temperatures, persons who eat home-canned foods should consider boiling the food for 10 minutes before eating it to ensure safety.

Centers For Disease Control and Prevention