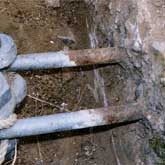 Long ago, in a laboratory far, far away...before the development of the atomic theory we now use, scientists believed in a principle called animism, and that the chemistry of different materials was controlled by different proportions of certain reactive principles. Under certain conditions, a material that formed from the increase of a specific reactive principle could be made to revert to its original form. This was made to happen by reducing the proportion of a particular reactive principle that it contained.

Metals, for example, were observed to change into oxides by the absorption of and combination with the active principle of 'air'. As the amount of this principle increased, so did the transformation of the metal. Now, if this 'oxide' was heated strongly enough or treated with certain other materials, the amount of 'air' it contained could be reduced, and the oxide would revert back to the original metal. (Magic!)

Eventually the process became known simply as 'reducing' or 'reduction'. Investigation and research revealed the underlying electronic process of reduction. In reduction an atom or element gains control of a certain number of electrons from a material called a reducing agent. The gain of electrons by a chemical species is reduction. Reduction always occurs simultaneously with oxidation. For example, in the course of a reaction to form two C - O bonds, in the oxidation of a carbon - carbon double bond by potassium permanganate, the manganese atom is itself reduced and gains control of five electrons to go from an oxidation state of +7 to +2.