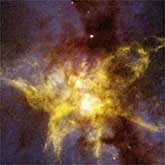 Because he originally thought the Universe was static, Einstein conjectured that even the emptiest possible space, devoid of matter and radiation, might still have a dark energy, which he called a 'Cosmological Constant.' When Edwin Hubble discovered the expansion of the Universe, Einstein rejected his own idea, calling it his greatest blunder. As Richard Feynman and others developed the quantum theory of matter, they realized that 'empty space' was full of temporary ('virtual') particles continually forming and destroying themselves. Physicists began to suspect that indeed the vacuum ought to have a dark form of energy, but they could not predict its magnitude.

Through recent measurements of the expansion of the Universe, astronomers have discovered that Einstein's 'blunder' was not a blunder: some form of dark energy does indeed appear to dominate the total mass-energy content of the Universe, and its weird repulsive gravity is pulling the Universe apart. We still do not know whether or how the highly accelerated expansion in the early Universe (inflation) and the current accelerated expansion (due to dark energy) are related.

A Beyond Einstein mission will measure the expansion accurately enough to learn whether this energy is a constant property of empty space (as Einstein conjectured), or whether it shows signs of the richer structure that is possible in modern unified theories of the forces of nature.