What is Garlic Mustard? 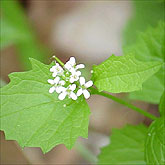 If someone told you that they were going to look for garlic mustard, you would probably think they were making dinner. Garlic Mustard, or Alliaria petiolata, is actually a plant native to Europe. It belongs to the mustard family and when crushed, gives off the aroma of garlic. Garlic Mustard is a biannual herb with heart shaped leaves and small white flowers which produce seeds in June. This plant can be found in moist areas, along roadsides and in forests. Garlic Mustard is also an invasive plant.

Invasive plants are those that out-compete native plant species and take over large areas. They pose a threat ecologically to many other plant and animal species in the area. For instance, Garlic Mustard takes over all the nutrients, light and water in an area, out-competing bloodroot, toothwort, Dutchman's breeches and wild ginger, to name a few. Chemicals in the plant appear to be toxic to the threatened West Virginia white butterfly's eggs (Pieris virginiensis).

New York, in 1868, was the first place in the United States to record Garlic Mustard as a plant in the area. Now Garlic Mustard is an invasive species seen in Canada, the northeastern states and as far west as Kansas. Many national parks and other organizations are trying their best to beat the Garlic Mustard because it tends to take over large areas, as many invasive plants do. The method to this control includes pulling the whole plant out of the ground, including the root, before seeds are produced. In large areas the plants are cut down before seed production and the last choice of control would be herbicide.