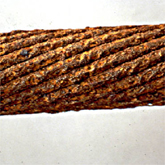 The term 'oxidation' derives from the ancient observation of rust (oxide) formation. Early chemists could determine an increase in the weight of a metal as it apparently captured something from the air and transformed into a completely different material The 'something' was eventually identified as oxygen, and the new materials that formed were called 'oxides'. The chemical process came to be known as oxidation.

The underlying transaction of oxidation was eventually identified as an alteration of the electronic structure of an element or compound. More accurately, this can be described as how strongly an atom 'owns' or controls the electrons around it. In an ion and ionic bonding, the atom controls its electrons completely, either by accepting them or by giving them up. In covalent bonding, an atom can be seen as sharing control of its electrons with another atom.