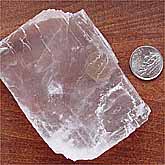 Sodium is a required element in human physiology. The eleventh element in the periodic table, sodium is a soft, silvery white metal that can be easily cut through with a paring knife. It is highly reactive, and reacts readily and vigorously with water to produce sodium hydroxide, giving off a great deal of heat in the process. It would react as vigorously and more with body fluids and stomach acid.

Chlorine is a required element in human physiology. The seventeenth element in the periodic table, chlorine is a pungent, yellowish-green gas that has been used as an agent of chemical warfare. It causes blindness on contact, blistering, pulmonary edema, and destroys the lining of the lungs. It is commonly used as a bleaching agent because of its ready ability to eliminate unwanted colors and odors by destroying the molecules responsible for them.

When metallic sodium and chlorine gas are allowed to come into contact with each other, a very energetic reaction occurs in which the sodium metal actually bursts into flame. The union of these two elements produces one of the most innocuous materials known: sodium chloride, common table salt.