When Did A Cat Become A Kitty? 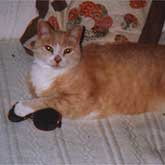 It has long been thought that cats were first domesticated in Egypt, about 4000 years ago. Indeed, they were very highly thought of in ancient Egyptian society. It was illegal to kill or harm them, and illegal to export them to other countries. When they died, they were often mummified in the same way as deceased human bodies. In fact, archaeologists working in Egypt have found more cat mummies than human mummies!

Unlike dogs, which are thought to have been domesticated by hunters, cats were domesticated by farmers. Stored grain attracted mice and rats to human settlements, and the ready supply of rodents attracted cats. People were glad to have the cats killing off the mice and rats, and gradually a friendly relationship developed. But in ancient Egypt cats were always free to come and go as they pleased!

New evidence recently published in Science suggests that cats were actually domesticated much earlier, over 9000 years ago, in Cyprus, not Egypt. Cyprus is an island at the eastern end of the Mediterranean Sea, near Turkey. Archaeologists working in Cyprus found a cat skeleton buried near that of a human. The skeleton is complete, showing that the cat was buried shortly after death. It appears to have been buried together with the human remains, perhaps because the dead person’s family regarded the cat as an important individual. Possibly the cat was killed so it could accompany its owner in the afterlife.