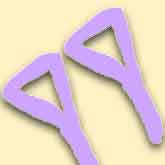 Many concepts that we all take for granted sounded strange and foreign when first introduced. Take the number zero for instance. Any first-grader can recognize and use zeros. They sound so logical and are such a basic part of how we do math. Zero equals nothing. What could be simpler? Yet early civilizations, even those that had a great proficiency with numbers, didn't have a concept for zero and didn't seem to miss it.

Before the time of Christ, early Babylonians and Hindus from India began using a symbol that eventually evolved into our numeral 0. You can see the Babylonian symbol at the right and the zero that we use today comes from the Hindu symbol. Both cultures used it to tell one number from another. For example, to distinguish a 4 from a 400 they would use the symbol for zero twice. But they didn't use zero as a numeral. They wouldn't compute 400 - 0 = 400. This was an enormous conceptual leap nonetheless, for it led to our modern-day concept of place value. It is much easier to represent twenty bags of grain with the numeral 2 and the symbol 0 than as twenty separate marks as other cultures did.

The concept of zero stayed pretty much to the peoples of the fertile triangle and the Indus peninsula. The Greeks and Romans didn't use zero. And neither did the post-Roman European cultures who continued to use Roman numerals. It wasn't until the Moor invasions of Northern Africa and Southern Europe that the concept of zero both as a place holder and a numeral began making its way into Europe. The Italian mathematician Fibonacci was one of the first to present the concept of zero to Europe. Slowly, over the centuries, the Europeans began using Arabic numbers, including zeros. They were reluctant adaptors, for they also continued to use Roman numerals. But zero's time had come and that's a good thing, for advancements in mathematics lean heavily on this symbol for nothing.