Why Doesn't Glue Get Hard In The Plastic Bottle? 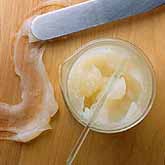 Glue, in its many different forms, is a very simple-to-apply sort of thing that represents a surprisingly complex amount of chemistry and physics. On the face of it, what could be simpler? Put on the glue, press the two things together, the glue dries or gets hard, and two things that weren't joined together previously are sudden;y impossible to get apart. At least, it works that way if you've gotten the glue in the wrong place or spilled it on the carpet. How can just letting something get hard have that result? Just why should that process work at all? And why doesn't the glue get hard in its plastic bottle? The fact of the matter is that, if not handled or stored properly, glue does go maddeningly hard in its plastic bottle; it just takes longer. Glues function by forming a physical link that joins two things together. Ideally, this happens in a completely controlled way, but as anyone who has left the top off of the bottle knows, the 'controlled way' can be just wishful thinking.

There are just two different approaches to the application of glue materials. Polymer molecules are huge, long, twisty things, as far as molecules go, and their structures can be tailored to include different 'functional groups' that tend to stick to each other and to other materials electrostatically, like so many little magnets. Polymer molecules can also intertwine with each other, forming a much larger tangled mass. In a liquid form, polymer molecules are able to fill in the microscopic pores and fissures that exist on a material surface. Glues make use of all of these chemical and physical properties to form a solid mechanical bond between two surfaces. All glues are applied in a liquid form, which allows the user to place a mass of polymer molecules precisely where he or she wants them to be placed. Once in place, the glue can be allowed to solidify. Solidification sets the polymer molecules rigidly in place, binding the two surfaces together.

Where the two approaches differ is in how the polymer molecules are set in place. In one method, the polymer molecules already exist and may be dissolved in a suitable solvent. Once the glue has been applied, the solvent is allowed to evaporate, which leaves the solid, polymeric material to form the mechanical bond. This is typical of such glues as the familiar 'white glue'. In the other type of application, the polymer molecules form in place after the application of a glue 'monomer'. This application method is typical of 'Crazy Glue' and 'model cement. Some glues use a combination of these two effects. This is the 'mode of operation' seen in 'ABS Plastic Cement', used to bond ABS plastic pipe joints, the plastic pipes often seen in various plumbing applications. It doesn't take rocket science to realize that allowing the solvent to evaporate, or exposing the glue to the oxygen in the atmosphere will encourage the glue to harden inside its plastic bottle.