Will Runaway Water Warm the World? 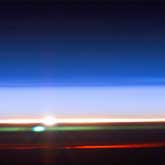 Water in the upper atmosphere will make the Earth heat up, but not as much as many scientists have believed, says a new study published by NASA scientists. Using satellite data, researchers Ken Minschwaner and Andrew Dessler at NASA's Goddard Space Flight Center have shown that the upper atmosphere does not get as humid as most scientists assumed, and that means that temperatures may not increase as much as some predict, though the problem of climate change is still significant. Across the globe, temperatures are slowly creeping up. Scientists estimate that the average global surface temperature could climb anywhere from 1.4 to 5.8 degrees Celsius by the year 2100. Part of the reason the predicted temperature range is so great is that scientists don't entirely understand whether the atmosphere will become more humid as it warms, and humidity is one of the primary factors that will influence warming.

When the Earth heats up, more water evaporates from the oceans. Hotter air can hold more water, so with higher temperatures, the humidity can be greater. Scientists have assumed that as the Earth heats up, enough extra water will enter the atmosphere to keep the relative humidity -- the amount of water in the air compared to what it can hold -- constant. Since water vapor traps heat next to the surface of the Earth, more water in the atmosphere leads to more heating, which leads to more water vapor... The loop is called water vapor feedback. When scientists assume that enough water vapor enters the atmosphere to keep the relative humidity constant, models show a temperature increase that is twice that caused by carbon dioxide alone.

Minschwaner, also a professor of physics at the New Mexico Institute of Mining and Technology, and Dessler, also a researcher with the University of Maryland's Earth System Science Interdisciplinary Center, formulated a simple, one-dimensional model to describe how the humidity of the atmosphere will change as the Earth heats up in response to carbon dioxide emissions from burning of fossil fuels. Surprisingly, their model predicted smaller increases in humidity in the upper atmosphere than large global climate models do, and data collected by the Microwave Limb Sounder and the Halogen Occultation Experiment on NASA's Upper Atmosphere Research Satellite (UARS) support their model. Their findings imply that the Earth will warm significantly, but probably not as much as most global climate models predict. Minschwaner and Dessler's results could help refine the scientific understanding of water vapor feedback and the models that predict climate change.