Yes! We Have New Bananas 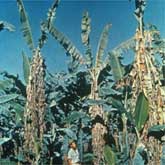 Did you know that a plant disease determined what banana variety is in your market? Bananas, which originated in Africa and are now grown in every tropical region, are perhaps the most popular fruit in the world. It is the most popular fruit in the U.S. even though we import nearly all of them. In addition to dessert bananas, the banana family also includes plantains, cooking bananas and abaca, a fiber plant called Manilla hemp. For many years the most popular banana sold in the United States was the variety 'Gros Michel', a preferred banana for shipping. However, 'Gros Michel' is very susceptible to Panama disease, a vascular wilt caused by a soil fungus, Fusarium oxysporum f. sp. cubense. It kills the banana plants by infecting the xylem (the water-conducting tissue) and destroying the plant's ability to distribute water and minerals to its tissues.

For a long time, banana growers moved their plantations to new fields to escape the disease, but as these new plantations became infected the growers eventually ran out of new ground. As a result many 'Gros Michel' plantings were converted to the more resistant 'Cavendish' varieties, even though in time these bananas also became diseased. So this disease has determined what banana you can buy.

Panama disease, also known as Fusarium wilt, is believed to have originated in Asia but gets it name from the damage it caused to banana plantations in Panama, as well as in other Central American countries, in the early 1900s. Bananas must be replanted after fruit production. They are not perennial trees. Since bananas are propagated vegetatively by suckers from the base of the plant, the fungus rapidly spread throughout banana growing areas. Once in the soil, the fungus can survive for many years and is spread further by machinery, contaminated soil and water, and by other physical means.