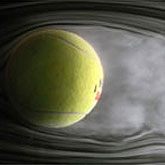 NASA is well known for developing technology that makes things better, so can you believe that NASA actually did research on how to make tennis balls slower?

A couple of years ago, the London-based International Tennis Federation (ITF) decided to look into introducing a slower tennis ball, and used NASA research in making the decision. The slower ball is intended to compensate for other new technology that has been introduced to the game. Improved racquets and other advancements have led to changes in the way tennis is played at professional matches. With the new racquets, tennis pros can serve the ball at almost 241 kilometers per hour [kph] (150 miles per hour [mph]), contributing to shorter rallies and more tie-breaker sets. In comparison, the fastest pitch on record in baseball was only 166 kph [103 mph].

In order to try to restore the way the game is played at these matches, the ITF used research conducted at NASA Ames Research Center in California to learn about the effects of changing the size of a tennis ball. NASA had already been studying the aerodynamics of tennis balls, and was involved in a project, in collaboration with Cislunar Aerospace Inc., to help get students interested in science and technology. The project used various aspects of tennis to demonstrate different principles of physics and aerodynamics. Students across the country were encouraged to perform experiments with tennis balls to help them learn more.