Does Your Beagle Have A Belly Button? 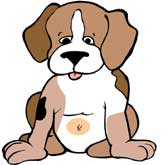 But does your dog have a belly button? Or a better question is, have you ever seen it if it does? Most people haven't. But this doesn't mean that it doesn't exist. Since mammals give birth to live young, they share in common the process of developing inside their mother. This, by necessity, requires a connection between the mother and the baby for the passing of nourishment, oxygen and clearing away waste. Dogs and cats are no different. Although each is born in a fluid-filled sac, it is still connected to its mother's placenta by an umbilical cord. In fact, a mother dog will bite and break each puppy's umbilical cord right after birth. Soon, just like us, all that's left is a scar.

Puppies don't have obvious belly buttons for a few reasons. The size of their umbilical cord is small. Sustaining a human baby requires a bigger umbilical cord, hence a bigger scar. A puppy's scar heals into a small slit rather than a round hole. And the area is quickly covered with fur, making detection more difficult. So next time your dog is taking a snooze on her back, take a look. With some investigation, you'll find its belly button.