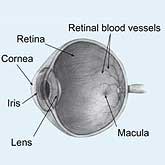 Some people become blind after suffering an injury to their primary visual cortex at the back of their brain. Since the visual processing part of their brain is damaged, they can't see. Or can they?

Researchers who have studied people with this kind of brain damage, called blindsight, have discovered that even though their patients have no awareness of vision, they might still be able to see. How could the researchers know that?

If you sit people with blindsight in front of a screen and shine a light somewhere on the screen, they will steadfastly deny seeing anything at all. But if you play a game of getting them to guess where the light would be if they could see it, they guess correctly more frequently than chance could explain. And if you move the light across the screen, their eyes follow it. So even though they have no consciousness of vision, their brain continues to see -- whether they know it or not!