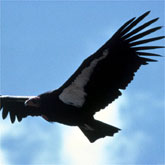 Archaeological evidence indicates that condors have been revered by western Native Americans for thousands of years and played a major role in their legends and rituals. Condors were considered sacred and capable of providing communication with the supernatural world as well as supernatural powers. In more recent times, the California condor has become the subject of an intense and sometimes controversial effort to save the species from extinction. Faced with rapidly declining numbers, scientists began collecting wild-laid eggs and capturing free-flying birds to breed them in captivity with the goal of eventually restoring the condor to its rightful place in the California skies. California condors are the largest birds in North America. They may weigh up to 25 pounds and have wingspans of 9 1/2 feet.

California condors have bare heads and necks, dull gray-black feathers, and blunt claws. They have a triangle-shaped patch of white, visible only when airborne, that adorns the underside of their wings. California condors can soar on warm thermal updrafts for hours, reaching speeds of more than 55 miles per hour and altitudes of 15,000 feet. Normally, California condors do not become sexually mature until the age of 6 and may not start breeding until age 7 or 8. They nest in caves or clefts on cliffs that usually have nearby trees for roosting and a clear approach for easy take-offs and landings. Typically, an adult pair lays one egg every other year, with the fledgling being dependent upon its parents through the next breeding season.

Like all vultures, condors are carrion-eaters. They prefer large dead animals like deer, cattle, and sheep, but will also eat rodents and more rarely, fish. If a meal has been particularly big, they may have to spend hours on the ground or a low branch before they can take off again. Condors are fastidious birds -- after eating, they clean their heads and necks by rubbing them on grass, rocks, or tree branches. Condors also bathe frequently and spend hours preening and drying their feathers. Condors were probably never very numerous in North America. The species once ranged along the entire Pacific Coast from British Columbia to Baja California. For years, no one knew precisely how many California condors existed, although they have been considered to be a declining species since the 1890s. One estimate put their number at 100 in the early 1940s. Another indicated there were 50 to 60 in the early 1960s. By the late 1970s, the estimate had dropped to 25 to 30 birds.