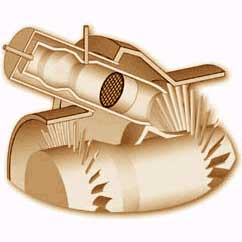 A catalyst is something that can interact with the reacting materials in such a way that the 'activation energy' barrier of the individual reactions becomes much lower. This usually occurs when reacting atoms or molecules adhere to the surface of the catalyst. The electrons of the affected molecules become partially rearranged in this association of catalyst and substrate, and in a way that is very favorable to the desired reaction. The association of catalyst and substrate is completely reversible. Once formed, the catalyst-substrate complex can dissociate in two ways: either they separate into their original unassociated forms, or they separate as the substrate completes its reaction transformation. In either case, the catalyst returns to its original form. So, while a catalyst becomes very intimately involved in the reaction process, it does not itself undergo a reaction, and is usually recovered intact after a reaction has gone to completion.

Perhaps the most readily known example of the application of a catalytic system is in the 'catalytic converter' of the typical automobile. It's purpose is to complete the combustion of gasoline residues coming from the engine. Under ideal conditions, gasoline would completely oxidized during combustion to produce mostly carbon dioxide and water. But in our less-than-ideal world, combustion is usually incomplete and the exhaust gases contain gasoline hydrocarbon molecules in various states of oxidation. These gases enter the catalytic converter where they pass through a dense honeycomb, with a very large surface area, coated with metals such as platinum or palladium that function very well as catalysts. Their atoms interact well with both hydrocarbons and oxygen, and in joining with the catalyst both become more reactive. When both are present on the catalytic surface, much less energy is needed to bring them into a reactive conformation, and reaction between them is made much easier.