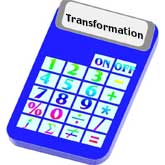 For example, think of wireless communications. If you use a cellular phone, then your service provider keeps track of you and hundreds of other cellular phone users so that your signals can be passed from one antenna to another as you move around. This involves a complicated calculation that's done many times a second by specialized computer chips called digital signal processors(DSPs). The calculation, or transformation, is applied to each row of a table of numbers, row after row, where each row represents a single caller. Since this process takes time, the number of people that can be talking on their phones simultaneously is limited by the speed that the DSPs work. If you've ever gotten a 'network busy' message, then you know that the DSPs have reached their limit.

Recently, a team of engineers and mathematicians produced a computer chip that can operate much faster than DSPs. In fact, part of the calculation is literally at the speed of light. Instead of crunching the numbers for each row individually, the numbers representing up to 256 callers are converted into separate points in a beam of light. The light beam is passed through a special lens that changes it (just the way glasses do). When it comes out on the other side of the lens, it has gone through a transformation that is exactly equivalent to the calculation that used to be performed by a DSP. But this time, hundreds of rows of data have been transformed all at the same time, instead of one at a time. To perform the same number of transformations the old way, you would have to be able to do Tera – that’s 1,000,000,000,000 –operations per second. Try that on an abacus!

Rochelle Treister brings her many years of business experience, a master's degree in computer science, an eye for detail, and a sensitivity to cultural nuance to her work as editor for ScienceIQ as well as chief editor for her company, Correct Me If I'm Wrong. Correct Me If I'm Wrong helps businesses of all types produce documents that are clear, credible and correct.