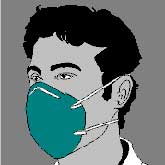 Recently a Chinese television producer fell ill with Severe Acute Respiratory Syndrome, better known as SARS. He is the first victim in many months, although an epidemic last year claimed nearly 8000 victims in several countries including the USA. Most of the victims were in China and nearby South Asian countries, although Toronto, Canada had several hundred cases.

How does a disease like SARS seem to go away and then reappear months later? Where does the virus go if it isn't making anyone sick? It turns out the virus can also infect various domestic animals such as cats and ferrets and civets, a weasel-like animals raised as a delicacy in China. The virus may have lived for years or even centuries in these animals, perhaps making them sick or perhaps not, before it evolved the ability to infect humans too. The same strain of SARS virus found in the sick television producer was also found in civets, so the Chinese government ordered the killing of all domestic civets. They are afraid the virus may be lurking in the animals, ready to start another epidemic.

However, experts add that we really do not know the animal reservoir for the SARS virus. And the recent SARS patient insists he hasn't been near any civets.