How Do They Grow Those Colossal Pumpkins? 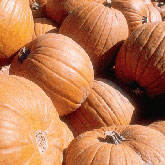 Those enormous pumpkins that set records every fall are living proof that both genes and environment make living things what they are. Home gardeners out to break the 2002 record for the world's largest pumpkin--held by Charlie Houghton of New Boston, New Hampshire whose colossus tipped the scales at 1,337.6 pounds--must be masters of both genetics and ecology.

Enormous pumpkins start from seed, but not just any seed will do. Most record-seeking pumpkin growers choose a single variety, Howard Dill's patented Atlantic Giant. It was selectively bred not for a single gene, but for a combination of genes that promote the maximal volume, number, and size of individual cells, as well as accelerated metabolism and growth rate. Two cotyledons sprout from an Atlantic Giant seed. These seed leaves were already present in the embryo inside the seed. They nourish the plant before true leaves, which can photosynthesize, appear. Atlantic Giant starts out big and gets bigger by the day. Its cotyledon pair typically measures 6 to 9 inches across. Its true leaves can grow as large as elephant's ears, and its blossoms are as big as dinner plates.

The skill of giant pumpkin growers lies in the care and feeding of the pumpkin vines. Environmental factors that affect size include watering, temperature, and sunlight. Fertilizing is critical, because the plants are voracious consumers of nitrogen, phosphorus, potassium, and other elements in the soil. The organic matter in compost and rotted manure is the best source, some growers say. Pumpkin planters use sulfur or lime to adjust soil pH to the slightly acidic range, between pH 6.5 to 6.8. Record-seeking growers usually build temporary greenhouses to protect their plants from frost, hail, and wind during the early weeks of growth. They pollinate the female flowers by hand to ensure that fruit set early. That gives their garden gargantuans the longest possible growth season before the competitive pumpkin weigh-ins held nationally and internationally each autumn.