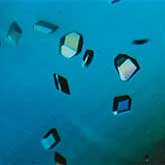 Diabetes is the 6th leading cause of death in the United States. About 17 million people (6.2% of the population) have diabetes. But the disease usually wears two faces. Type 1 diabetes affects young people and Type 2 diabetes affects adults. Doctors have determined that the causes are not the same. The effect though, is a manageable, but often debilitating disease.

In simple terms, the disease is a breakdown in the body's ability to regulate glucose in the bloodstream. Glucose is the food that our cells use to make energy. If glucose levels remain too high for too long, tissue damage occurs. Insulin, the hormone that controls the level of glucose, is produced by the pancreas. When the production of insulin is faulty, and glucose levels are not properly controlled, the result is the disease we call diabetes mellitus.

Type 1 diabetes, or insulin-dependent diabetes, occurs when the body's own immune system attacks and destroys the cells in the pancreas that make insulin. The onset of Type 1 is usually in children and young adults. People with Type 1 diabetes must take insulin, either by injection or through an insulin pump to avoid a life-threatening condition called diabetic ketoacidosis. Type 2 diabetes accounts for over 80% of all diagnosed cases and occurs when the pancreas makes some, but not enough insulin. More than 80% of people diagnosed with Type 2 are overweight, which leads to resistance of insulin action, and do not get proper exercise. Doctors believe that Type 2 diabetes is, in part, a lifestyle disease. Yet another reason to push that donut away and get on the exercise bike.

Dr. Carol Thomas is an Endocrinologist with a private practice in Palo Alto, California. Carol received her undergraduate degree at Stanford University and completed her medical residency at U.C.L.A. She is an Assistant Clinical Professor of Medicine at U.C.S.F. and has published numerous articles in her field of medicine. Dr. Thomas writes on endocrinology as well as general medical topics.