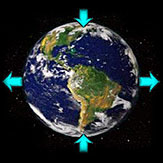 Besides being used for transmission of this email message to you, communication satellites are used for some neat science. By shooting a laser beam onto them and measuring how long it takes for light to bounce back, scientists at NASA measure precise orbits of a number of satellites and hence the Earth's gravitational field as a function of longitude and latitude. NASA has been making these measurements for the last 25 years and it turns out the results are quite interesting.

Data since 1998 shows an abrupt change in this trend. Earth's gravitational field is increasing now at the equator! Is the Earth getting fatter around the belt? Only significant movement in ocean water, polar and glacial ice, or atmosphere could account for these changes. Scientists are still not sure what the answer is, but some early research findings suggest it may be the movement in ocean water. Somehow, ocean currents gather large quantities of water around the equator every once in a while. Some scientists suggest that this is a cyclic event, but data is still inconclusive.