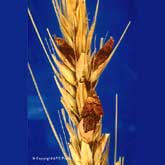 Did you know that a disease of rye is connected to LSD and witches? Ergot is caused by a fungus that attacks a number of cereal grains, but rye is most severely infected. The healthy grains are replaced by dark purple structures called ergots or sclerotia that resemble the grain kernels but are somewhat larger. Ergot sclerotia contain a number of chemicals that produce a range of effects in animals and humans including convulsions, hallucinations and constriction of blood vessels. One symptom of ergot poisoning is a burning sensation of the skin, sometimes called 'Holy Fire.' People suffering this condition often prayed to St. Anthony for relief, and the condition also became known as 'St. Anthony's Fire.'

One ingredient of ergot is lysergic acid, which can be converted to the hallucinogenic drug, LSD (lysergic acid diethylamide). Some historians believe that the hallucinations and convulsions from ergot poisoning resulted in the witchcraft trials in Europe, especially in Germany and France, and in America at Salem, Massachusetts. Ergot poisoning was much more frequent among peasants who could afford only black (rye) bread than among the more affluent who could buy white (wheat) bread, which is less subject to ergot contamination.

Ergot chemicals also have served medicine. One of the earliest uses was to induce labor in pregnant women. Some ergot compounds constrict the blood vessels and reduce the flow of blood. This property has been used in the treatment of migraine headaches, but can cause gangrene and loss of limbs. Loss of hands and feet was an early hallmark of ergotism and frequently was pictured in illustrations of the middle ages. Ergot in cattle feed can cause serious losses from abortion of young animals and debilitating loss of hooves and feet. Now that we know that the ergots are poisonous, disease managemnt and grain inspection of rye grain before processing protects us from ergotism today.