How Do Bacteria Reproduce? 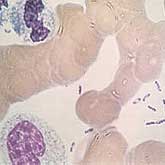 Bacteria are microorganisms that have been around for billions of years. How have they survived all that time? Microorganisms are experts at reproducing, not only can they produce new bacteria fast, but easily too. They have various methods of reproduction, including binary fission and budding. Both are simple, fast methods to produce more bacteria.

Binary fission is when a bacterium copies its DNA, to make an exact replica, and then partitions itself in two. The bacterium is actually making a clone of itself because the second has the same DNA as the first. This method of reproduction is so fast that a single microorganism could make a billion more just like itself, if conditions were right, in just 10 hours. Budding is also fast and easy. A bud forms out of the side of a microorganism, then the 'mother' makes a nucleus just for the bud by means of mitosis. The nucleus is given to the bud and it breaks off. Another microorganism is formed!

Binary fission and budding are also forms of asexual reproduction, which means the exact same DNA is passed on, sometimes called a clone. There is no need for another bacterium to swap DNA in asexual reproduction, but this makes it hard for bacteria to evolve. Therefore, they use conjugation to exchange DNA between two different bacteria. Conjugation is a little more complicated than binary fission or budding. It actually involves two bacteria. One bacterium extends a pilus, or long tubule used to exchange DNA, to the other bacterium. They swap some of their DNA, the pilus is retracted and the bacteria are on their way, having picked up traits from each other, traits that will help them adapt better to different environments.