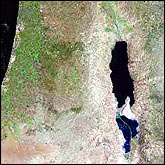 The Dead Sea is located on the boundary between Israel and Jordan at a lowest point on earth, at 400 meters (1,320 feet) below sea level. All waters from the region, including the biggest source, the Jordan River, flow into the Dead Sea where there are hardly any outflows short of ground based sink holes and evaporation. This makes it the saltiest and most mineral-laden sea in the world.

The salt concentration is so great, (about one third of salt per weight of water), that fish introduced into the sea by the Jordan River die almost instantly. Only bacteria and halophytes (plants that grow in salty soils) survive. White salt crystals form at the bottom and on the edges of the sea. This high salinity, and hence high density of the water, makes the Dead Sea one of the greatest swimming pools in the world. Even if you don’t know how to swim, don’t worry, you will be able to effortlessly float in the Dead Sea.

The latest measurements indicate that Dead Sea may be in trouble. Namely, the surface level of the water is retreating by 3 feet (90 cm) each year. Many believe that the problem lies in insufficient volume of water flowing into it from the Jordan River due to its overuse by the urban areas. Will the Dead Sea one day be called the Dry Sea? Time will tell.