Send In the Lady 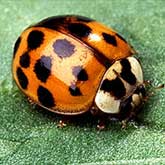 One of the world's most recognizable insects is the ladybug. Ladybugs belong to a family of insects called Coccinellid, with about 5,000 species identified. But this little insect is more than just another pretty face, for the ladybug has been enlisted to fight in the front lines in our eternal war against insect predators. And with a reported 15% of all food and ornamental crops damaged or destroyed by insect pests, we can use all the help we can get.

Biological control is nothing new. For centuries farmers have sought the help of not only ladybugs, but praying mantis, wasps and mites as well. With recent concerns about the overuse of pesticides, there has been a renewed focus on fighting insects with their natural predators. The ladybug is well equipped for the job. In both the larval and adult stages, they prey on many soft-bodied bugs, including aphids and scales.

Like anything else though, you can have too much of a good thing. Nature is a balance, not only on a global, but also on a regional and local level. If the balance is thrown off, unexprected consequences may result. With this in mind, many farmers are using a combination of pesticides and natural insect control. And one of their favorites is the ladybug. Need help getting rid of those aphids? Send in the lady.