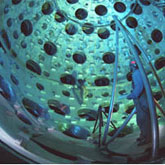 In a rural community in Northern California, in a building spanning the length of two football fields scientists are creating the world's largest laser. The National Ignition Facility project, know as NIF, is being developed by Lawrence Livermore National Laboratory for the U.S. Department of Energy.

When complete, the facility will house 192 laser beams in two bays. The beams will generate a peak power of 1000 times the electric generating power of the entire United States, although only for a few billionths of a second. When fired, the laser light from the beams will travel through tubes almost the length of the entire building, and pass through giant crystals that will covert the infrared light of the lasers to ultraviolet light. The ultraviolet light from the 192 lasers will then converge on a 10-meter diameter target chamber that looks nothing but out of this world. The ultimate target is inside this chamber; a BB-sized plastic sphere, holding fusion fuel. The hydrogen fuel will reach temperatures of 100 million degrees and will be converted to helium with the release of fusion energy.

The goal of this ambitious project is national defense and research in the areas of energy creation through fusion power, nuclear reactions, astrophysics, and material sciences.

Irving Stowers is a Senior Scientist in Systems Engineering for the National Ignition Facility at Lawrence Livermore National Laboratory. Irving received his ScD degree at the Massachusetts Institute of Technology. One of his responsibilities is authorship and maintenance of all NIF procedures affecting structural and optical cleanliness to prevent damage to the many optical components.