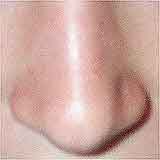 A recent experiment performed by researchers at Philadelphia's Monell Chemical Senses Center, probably the world's pre-eminent institution devoted to the study of smell, showed that the world smells different through your two nostrils. When the participants in the experiment sniffed through their left nostril, connecting to their left brain, they showed slightly better skill identifying odors by name. When they sniffed through their right nostril, they found the odors more pleasant. Why the difference?

The right nostril connects most directly to the right hemisphere, while the left links to the left side of the brain. For most people, even left-handers, the dominant language centers are in the brain's left hemisphere. The right hemisphere dominates, by contrast, for some kinds of emotional processing. That's why people with a stroke on the left side of their brain often lose basic language skills, such as the ability to find the right word for an object or to string words together intelligibly. Right-brain stroke patients are more likely to lose certain emotional components of their speech, such as the ability to modulate the pitch and loudness of their voice.