The Neurological Complications Of Lyme Disease 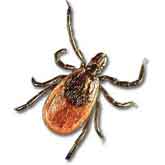 Lyme disease is caused by a bacterial organism that is transmitted to humans via the bite of an infected tick. Most people bitten by an infected tick develop a characteristic skin rash around the area of the bite. The rash may feel hot to the touch, and vary in size, shape, and color, but it will often have a “bull’s eye” appearance (a red ring with a clear center). However, there are those who will not develop the rash, which makes Lyme disease hard to diagnose because its symptoms and signs mimic those of many other diseases. Seven to 10 days following an infected tick’s bite, the first stage of Lyme disease begins with flu-like symptoms such as fever, chills, swollen lymph nodes, headaches, fatigue, muscle aches, and joint pain.

Neurological complications most often occur in the second stage of Lyme disease, with numbness, pain, weakness, Bell’s palsy (paralysis of the facial muscles), visual disturbances, and meningitis symptoms such as fever, stiff neck, and severe headache. Other problems, which may not appear until weeks, months, or years after a tick bite, include decreased concentration, irritability, memory and sleep disorders, and nerve damage in the arms and legs. Lyme disease is treated with antibiotics under the supervision of a physician.

Most individuals with Lyme disease respond well to antibiotics and have full recovery. In a few patients symptoms of persisting infection may continue or recur, requiring additional antibiotic treatment. Varying degrees of permanent joint or nervous system damage may develop in patients with late chronic Lyme disease. In rare cases, some individuals may die from Lyme disease and its complications.