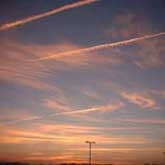 There are many different types of clouds in the sky, but did you know that some of them are man-made? 'Contrails' are the long, thin clouds that are left by airplanes as they fly past. Contrails (short for 'condensation trails') are line-shaped clouds that are sometimes formed by airplane exhaust, usually at high altitudes. Even though contrails have a high-tech origin, they have a very down-to-Earth cousin that almost everyone has seen. Have you ever gone outside on a cold day and been able to see your breath when you exhale? That little cloud is formed by the water vapor in your breath, which is normally invisible. In cold weather, however, the vapor condenses into a visible cloud.

Contrails are formed in much the same way. Aircraft engine exhaust contains water vapor, and since temperatures are colder at higher altitudes, that water vapor condenses into a visible form as ice crystals, leaving the streaks across the sky behind airplanes. The water vapor from the aircraft engine may also be joined by moisture already existing in the air, contributing to the size of the contrail. Contrails may occur as one of two different types, depending on atmospheric temperature and humidity. If the humidity is low, then a short-lived contrail will form. Short-lived contrails are visible only for a short distance behind the airplane and dissipate quickly.

In higher humidity environments, a persistent contrail will occur. Ice particles formed by the condensation of the water vapor from the engine exhaust will be joined by water in the atmosphere, creating a contrail that extends a long distance behind the airplane, and can remain visible long after the airplane has gone. Persistent contrails can last for hours and can even continue to grow, spreading to several miles in width, and becoming as tall as the length of two to four football fields. These contrails can even continue to spread until they turn into cirrus clouds indistinguishable from naturally occurring clouds.