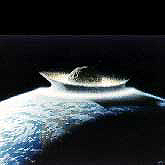 Recently, some astronomers were concerned that a newly discovered asteroid might hit Earth in 2017. This was big news because even the impact of a modest-sized asteroid could have a devastating effect. In fact, a large impact 65 million years ago is thought to have wiped out the dinosaurs. So scientists take seriously any potential asteroid impact with the Earth. A few days after the discovery, scientists changed their minds and said there was no need to panic. This particular asteroid was not going to come even close.

If you go back over the last few years, you'll see this same thing repeatedly: first, a possible collision; next, a retraction. So what gives? Were the calculations all wrong? Actually not. In most cases it had to do with recalculations based on pre-discovery images of the asteroid. In effect, scientists looked backwards in time to make a better prediction about the future.

Astronomers use computers to take multiple pictures of the same part of the night sky over time. These pictures are compared. If a point of light appears to have changed position, we know that it is moving very fast. The background stars, since they are so much farther away, don't appear to move over a short period of time. But these initial pictures don't tell scientists too much. Instead, now that they know what they've found and where they've found it, they can go back to historical images of the same section of sky, taken all over the world. With careful examination, they can find the same asteroid in earlier pictures. This helps them come up with a much more accurate prediction of the asteroid's path. So far, no one has predicted an asteroid impact with Earth. And we are very thankful for that.