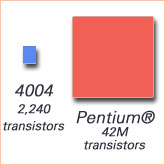 Intel is the corporate giant known for manufacturing semiconductors, also called computer chips or integrated circuits (ICs), and its Pentium Processor. But Intel is also known for laying down the law. In 1965, just a few years before he would go on to co-found Intel, Gordon Moore set out an observation that has since become known as 'Moore's Law.'

Simply stated, Moore's Law holds that the number of transistors packed into an integrated circuit will double every year, a trend that in fact has loosely held up since the late 60s. Transistors store information on chips by holding or releasing electrical charges that flow through the chips. More transistors equal more data storage. Many in the computer industry expect Moore's Law to hold for at least another 10 years. To get an idea of just how amazing Moore's law turns out to be, consider this. In 1971 Intel released the 4004, the world's first single chip microprocessor - only .118 by .157 inches, (3 by 4 mm) in size, but containing 2,240 transistors. That was as much power as the original ENIAC computer which was 80 ft. (24m) long and 10 ft. high (3m). In 2000, Intel's Pentium 4 processor, not all that much bigger than the original 4004, contained an amazing 42,000,000 transistors.

Will Moore's Law fail? Yes and no. As silicon chips shrink to just a few nanometers of thickness, it will become harder, and finally impossible to control the flow of electrons. But don't count out transistors made from something other than silicon. There are many promising candidates hoping to extend the life of Moore's Law indefinitely.