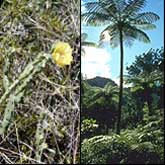 If you drive around Southern California you'll see a lot of palm trees and prickly pear cacti. If you drive around Southern Spain you will too! How did it happen that two places an ocean apart have the same desert plants? The Prickly Pear Cactus, known to scientists as 'Opuntia', is native to the American Southwest and Mexico. In Mexico they are called 'nopales'. They are the most widespread cactus in North America, found all over the Southwest and deep into Mexico. The state of Texas recently named the prickly pear as the state fruit! The fruits are shaped like pears, hence the name, and are edible once you peel off the prickly skin. Texas ranchers feed the found, flat stems to their cattle (after scorching off the thorns).

In Spain they are called 'chumberas'. How did they get across the Atlantic Ocean? The Spaniards who discovered and colonized Mexico and Southern California in the 16th Century brought some back to Spain, where they have flourished in the similar hot, dry climate. The palm trees traveled in the opposite direction. The Moors who conquered Spain in 711 AD brought date palms from North Africa over 1000 years ago and developed a highly successful system of cultivating them. Some of these palm groves survive today, especially around the city of Elche in Southern Spain.

In the 18th Century the spanish missionaries who ran the missions along the California coast brought date seeds to the new world. The Southern California desert turned out to be ideal for commercial date gardens (as in Spain, they must be irrigated). Now Southern California produces over 30 million pounds of dates every zear, 95% of all the dates grown in the U.S. How's that for a trade? The New World sent the prickly pear cactus to Spain, and Spain sent the date palm to the New World.