Pluto Is Way Out There 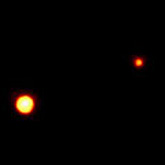 Long considered to be the smallest, coldest, and most distant planet from the Sun, Pluto may also be the largest of a group of objects that orbit in a disk-like zone of beyond the orbit of Neptune called the Kuiper Belt. This distant region consists of thousands of miniature icy worlds with diameters of at least 1,000 km and is also believed to be the source of some comets. Discovered by American astronomer Clyde Tombaugh in 1930, Pluto takes 248 years to orbit the Sun. Pluto's most recent close approach to the Sun was in 1989. Between 1979 and 1999, Pluto's highly elliptical orbit brought it closer to the Sun than Neptune, providing rare opportunities to study this small, cold, distant world and its companion moon, Charon. Most of what we know about Pluto we have learned since the late 1970s from Earth-based observations, the Infrared Astronomical Satellite (IRAS), and the Hubble Space Telescope.

Pluto and Charon orbit the Sun in a region where there may be a population of hundreds or thousands of similar bodies that were formed early in solar system history. These objects are referred to interchangeably as trans-Neptunian objects, Edgeworth-Kuiper Disk objects or ice dwarves. Pluto is about two-thirds the diameter of Earth's Moon and may have a rocky core surrounded by a mantle of water ice. Due to its lower density, its mass is about one-sixth that of the Moon. Pluto appears to have a bright layer of frozen methane, nitrogen, and carbon monoxide on its surface. While it is close to the Sun, these ices thaw, rise, and temporarily form a thin atmosphere, with a pressure one one-millionth that of Earth's atmosphere. Pluto's low gravity (about 6 percent of Earth's) causes the atmosphere to be much more extended in altitude than our planet's.

Because Pluto's orbit is so elliptical, Pluto grows much colder during the part of each orbit when it is traveling away from the Sun. During this time, the bulk of the planet's atmosphere freezes. In 1978, American astronomers James Christy and Robert Harrington discovered that Pluto has a satellite (moon), which they named Charon. Charon is almost half the size of Pluto and shares the same orbit. Pluto and Charon are thus essentially a double planet. Charon's surface is covered with dirty water ice and doesn't reflect as much light as Pluto's surface. Because Pluto is so small and far away, it is difficult to observe from Earth. In the late 1980s, Pluto and Charon passed in front of each other repeatedly for several years. Observations of these rare events allowed astronomers to make crude maps of each body. From these maps it was learned that Pluto has polar caps, as well as large, dark spots nearer its equator.