The Art of Hunting 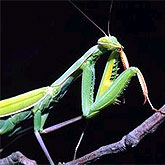 Most of us have seen a praying mantis. Two thousand species of praying mantis are scattered throughout the world, ranging in size from less than half an inch (1.27 cm) to more than five inches (12.7 cm). In tropical regions, up to 350 species can inhabit an area. Although most of us place praying mantises in a class of their own, entomologists have classified them in the order Orthoptera that includes six families – including cockroaches and walking sticks.

Mantises have a single ear slit, about a millimeter in length, and two teardrop-shaped eardrums, which face each other from opposite walls inside the slit and function as a unit. This single ear gives the praying mantis hearing in the ultrasonic range between 25 and 100 kilohertz. Although a single ear can't locate the source of the sound (an ability that requires two ears, separated), nondirectional hearing in this range is particularly useful to the mantis when bats, using sonar to navigate, are in the area.