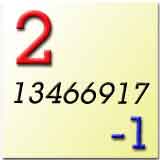 The ancient Greeks were the first to speculate on prime numbers, and Euclid was the first to come up with a mathematical proof that prime numbers continue infinitely. There is no known formula for determining prime numbers. To find one, you have to see if a specific number is divisible by any lower number. With very large numbers, that's not easy to determine. But with the advent of the computer, scientists and mathematicians continue to push the boundary of defining the largest prime number. Currently, the top known prime number is (2 raised to the power of 13466917) -1. Without the microprocessor doing all the heavy lifting, it is doubtful we would have come close to such a large number. But despite all this focus on prime numbers, no pattern has yet emerged allowing for a formula for determining further prime numbers.