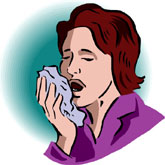 SARS, short for Severe Acute Respiratory Syndrome, is big news this spring. By the middle of April 2003, over 2000 people had been diagnosed with it in China and Hong Kong, another few hundred in the rest of Asia, and over a hundred in the US and Canada. Over 100 victims had died.

SARS is a 'new' disease, which feels like a bad case of flu (fever, headache, bad cough). But it's not caused by the flu virus. Scientists aren't sure what causes it, but at present the most likely culprit is a new kind of coronavirus. Well-known coronaviruses cause colds in humans and severe illnesses in cats and dogs, but this is the first to cause severe illness in people. SARS is not the first new disease in recent memory, nor is it the worst. AIDS was first found in humans in the 1980s, and now infects millions. Modern airplane travel makes it easy to spread new diseases to all corners of the world in just a few weeks.

How does a 'new' virus happen? A virus is nothing but DNA in a protein capsule, hardly even worth being called alive. In order to make you sick, it must enter the cells in your body, splice itself into your DNA, and take over running the infected cell, forcing the cell to make more virus copies instead of going about its usual business. At various times in their travels from one host to another, viruses can pick up extra genes, including some that enable them to make people sick (when they couldn't before). This is Mother Nature at work, always coming up with something new!