Did You Smell Something? 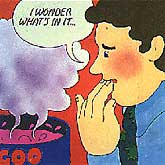 There's not a moment of our lives when smells -- or, more precisely, odor molecules -- aren't impacting our brain. It's been estimated that it takes at least 40 molecules of a given odor for us to be aware of a smell. But each one of our receptor cells can fire in response to as little as a single odor molecule wafting through the air. So even if we think we're not smelling anything, our brain may disagree.

Many studies have shown that your brain reacts to smells whether or not you're aware of them. Undetected odors can alter your brain's electrical activity, according to EEG readings, and can trigger measurable physiological reactions such as changes in body temperature and heart rate. In one experiment, the part of the brain that reacted to the odor molecules was a region responsible for focusing attention and directing awareness. It seems that our brain may be aware of smells and attending to them whether or not our conscious mind is paying attention!