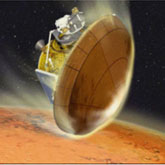 Imagine you're going very fast -- much faster than a race car. In fact, imagine you're going 100 or 200 times faster than a race car. When you reach your destination, you need to stop relatively quickly. How would you do it? It wouldn't take a rocket scientist to think of using the brakes. But, it might take a rocket scientist to skip the brakes, and use nothing but thin air to slow down.That's the idea behind aerocapture, a technology currently being researched by NASA scientists. While a lot of spaceflight research being performed now deals with better and faster ways of reaching destinations in space, aerocapture is part of a field of research looking at better ways of stopping once you get there.

Traditionally, putting a spacecraft into orbit around another planet or landing a probe has required that the craft carry extra fuel to help it stop once it arrived at its destination. Given the concerns of cost and mass involved in launching a spacecraft, having to carry extra fuel for braking could place some major limitations on proposed science research missions--limiting the amount of scientific equipment that could be carried on some flights and ruling some missions out entirely. Aerocapture is a braking method that requires no extra fuel, but instead involves the use of a planet's atmosphere to slow down a spacecraft. Use of this technique could reduce the typical mass of an interplanetary spacecraft by half or more, allowing for a craft that is smaller and cheaper, but also better equipped to conduct long-term science research at its destination.

NASA researchers are currently developing technologies required to make aerocapture in interplanetary flight a reality, and are considering use of the technique for possible missions to Mars, Neptune, and Saturn's moon Titan. When the research is completed, and if those missions, or others similar to them, are successful, then some of the biggest challenges in interplanetary flight could disappear--into thin air.