Table Salt - It's All In The Ions 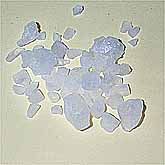 All elements are defined by their individual atoms, which are in turn identified by the number of protons in the nucleus of each atom. Since protons are carriers of positive electrical charge, there must then also be an equal number of negative electrical charge carriers in an electrically neutral atom. Sodium atoms in sodium metal and chlorine atoms in chlorine gas are electrically neutral. Each sodium atom has exactly eleven protons in its nucleus, and exactly eleven electrons. Each chlorine atom has exactly seventeen protons in its nucleus and exactly seventeen electrons. There is a fundamental difference in the way protons and electrons are held within an atom, however. All protons are bound very tightly into the small nucleus, in association with a certain number of electrically-neutral particles called 'neutrons'. The neutrons act like a sort of 'nuclear glue' to hold the protons together.

Electrons, on the other hand, are held much less tightly to the atom. They surround the nucleus at a distance like a cloud, and each electron is approximately 2000 times less massive than either a proton or a neutron. It thus takes a very small amount of energy to remove electrons from an atom. Another feature of the electronic system of atoms, fundamental to 'quantum electronics', is that electron behavior in atoms requires them to exist in specific 'energy levels' that can each accommodate only a certain maximum number of electrons. These are the so-called 'principle quantum levels' of the atom, and the outermost one is called the 'valence shell'. For reasons that are not yet clearly understood, atoms prefer to be in a form in which a filled principle quantum level is the valence shell, and they will quite readily accept, donate, or share a number of electrons to get that way. The chemical identity of the material changes in order to achieve that electronic condition.

Neutral sodium atoms have a single electron in the outermost level; losing it produces a sodium ion bearing a single positive electrical charge, and whose valence shell is now a completely filled principal quantum level. Similarly, neutral chlorine atoms are just one electron short of having a filled principal quantum level as the valence shell. They readily accept that extra electron to produce a chloride ion bearing a single negative electrical charge. The atoms involved are still sodium and chlorine atoms; they haven't changed the number of their protons, and so have retained their elemental identity. But their chemical identities have changed drastically. An ion is not the same as a neutral atom. So while we generalize and say that our physiology requires sodium and chlorine, it must be remembered that this refers to the elemental identity of these materials. Specifically, our physiology requires sodium as sodium ions and chlorine as chloride ions.