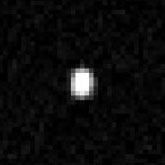 The Kuiper (pronounced Ki-Per) Belt is often called our solar system's 'final frontier.' This disk-shaped region of icy debris is about 12 to 15 billion kilometers (2.8 billion to 9.3 billion miles) from our Sun. Its existence confirmed only a decade ago, the Kuiper Belt and its collection of icy objects - KBOs - are an emerging area of research in planetary science. The most recent exciting discovery to come out of the Kuiper Belt is 'Quaoar' (Kwa-whar), officially known as 2002 LM60, a frozen world orbiting our sun about a billion miles beyond the orbit of Pluto. The tiny world's diameter is 1,300 km (800 miles) - about half the size of Pluto. It is the largest of the more than 500 Kuiper Belt Objects discovered in the last decade. KBOs like Quaoar are tough to spot. The tiny objects are billions of kilometers from Earth and very difficult to pinpoint with ground-based telescopes. Even the powerful cameras of NASA's Hubble Space Telescope can only produce rough images.

In 1950, Dutch astronomer Jan Oort hypothesized that comets came from a vast shell of icy bodies about 50,000 times farther from the Sun than the Earth. A year later astronomer Gerard Kuiper suggested that some comet-like debris from the formation of the solar system should also be just beyond Neptune. In fact, he argued, it would be unusual not to find such a continuum of particles since this would imply the primordial solar system has a discrete 'edge.' This notion was reinforced by the realization that there is a separate population of comets, called the Jupiter family, that behave strikingly different than those coming from the far reaches of the Oort cloud. Besides orbiting the Sun in less than 20 years (as opposed to 200 million years for an Oort member), the comets are unique because their orbits lie near the plane of the Earth's orbit around the Sun. In addition, all these comets go around the Sun in the same direction as the planets.

Kuiper's hypothesis was reinforced in the early 1980s when computer simulations of the solar system's formation predicted that a disk of debris should naturally form around the edge of the solar system. According to this scenario, planets would have agglomerated quickly in the inner region of the Sun's primordial circumstellar disk, and gravitationally swept up residual debris. However, beyond Neptune, the last of the gas giants, there should be a debris-field of icy objects that never coalesced to form planets. The Kuiper belt remained theory until the 1992 detection of a 150-mile wide body, called 1992QB1 at the distance of the suspected belt. Several similar-sized objects were discovered quickly confirming the Kuiper belt was real. The planet Pluto, discovered in 1930, is considered the largest member of this Kuiper belt region. Also, Neptune's satellites, Triton and Nereid, and Saturn's satellite, Phoebe are in unusual orbits and may be captured Kuiper belt objects.