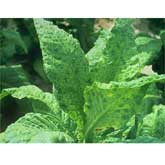 We all know that AIDS, SARS and flu are all caused by viruses. Most people, however, don't realize that some of the earliest work on viruses was done on a common plant virus, Tobacco mosaic virus (TMV). Over 100 years ago, Martinus Beijerinck described a 'mosaic disease of tobacco' in which sick plants developed a yellow-green 'mosaic' symptom on their leaves. Beijerinck passed sap of infected leaves through porcelain filters and showed that the filtered sap was infectious. He concluded that something smaller than bacteria caused the disease and used the term virus to describe this unusual agent of disease.

Wendell Stanley used TMV to demonstrate the 'non-living' nature of viruses. He showed that TMV could be crystallized and that virus crystals were still infectious when placed back in tobacco. For this revolutionary work, he received a Nobel Prize in Chemistry in 1946. Viruses are composed mostly of a nucleic acid (DNA or RNA) and coat protein that covers the nucleic acid. Ten years later, Heinz Frankel-Conrat used TMV to show that the genetic material was nucleic acid (RNA), and not protein, when he proved that TMV nucleic acid was infectious. He took the virus apart, and using only its nucleic acid, was able to infect plants that went on to produce complete viruses.