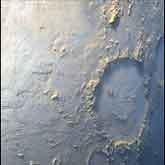 During the Viking missions to Mars in the mid 1970s, the planet was imaged from orbit by the Viking 1 and 2 Orbiters. These spacecraft returned images of regions of the planet that, while similar to geological features on Earth, are vastly different. One of the areas viewed by the Viking 1 Orbiter as it searched for potential landing sites was a flat-topped elevated area known as Cydonia. This is a mid-northern latitude (40.9oN, 9.45oW) area of low-lying hills, buttes, and mesas approximately 854 km across with a few impact craters. Among the hills and rocks is a weathered formation about 1.5 km across that quickly caught the attention of NASA scientists when the only picture taken by the Viking Orbiter of that area was examined. The formation somewhat resembled a face.

Images from NASA missions are routinely made available to the public and, as the Viking Mission at Mars progressed, NASA scientists wanted to release images that not only provided an insight into the complexities of the mission but also would help to make Mars appear a little more familiar. And what could be more familiar to people than a natural rock formation that resembled a face, like the 'Old Man in the Mountain' in New Hampshire, which by the way now graces the back of one of the new quarters. What NASA did not expect was the heated debate, lasting nearly 3 decades, over the origin of the formation. To some, the Cydonia Mesa was artificial, made by someone, while others argued that it was natural, simply an effect created by the rocks and long shadows caused by the low angle of Sun over the Martian horizon. Recent images from the Mars Global Surveyor show the formation to be nothing more than a weathered rock formation.

Interestingly, there is another, much larger, rock formation that does resemble a face. Lying about 90 degrees south of the Cydonia formation is a very large impact basin (868 km diameter) named the Argyre Planitia (low plains). While the floor of the basin is relatively smooth due to flooding from lava flows, numerous smaller impact craters surround it. One of these is the large crater Galle (230 km diameter), named after the discoverer of the planet Neptune. Crater Galle is very conspicuous in its appearance, looking quite a bit like a 'happy face'.