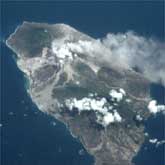 Geologists describe four types of volcanoes. Cinder cones, the simplest of volcanoes, grow as pieces of congealed lava rise from a central vent and form a funnel-shaped crater. Lava domes arise from lava too viscous to flow far or fast. The dome accumulates atop a central vent and expands from the inside. Shield volcanoes grow as fluid lava spreads outward from one or more vents. These volcanoes form broad, gently sloping domes shaped like a warrior's shield. Composite or stratovolcanoes are steep-sided and symmetrical. Built of alternating layers of lava, ash, cinders, and rocks, they grow as magma rises from a chamber deep inside the Earth's crust.

The famous Soufriere Hills volcano on the West Indies island of Montserrat is a stratovolcano. Its 1995 rebirth after a 400-year dormancy was phreatic, meaning 'steam blast.' When cold ground or surface water comes in contact with hot magma, expanding water vapor blows fragments of solid rock out of the magma channel, dispelling ash and gases into the atmosphere. Today, the Montserrat volcano grows through pyroclastic flows. These clouds of ash, rock, and super-hot gases tumble down the mountain at speeds that can exceed 100 kilometers (60 miles) per hour.

High pressure beneath the Earth's crust keeps gases dissolved in magma, but reduced pressure at the surface allows them to expand and escape. Eruption gases are 75 to 90 percent water vapor. Carbon dioxide, sulfur dioxide, and traces of nitrogen, carbon monoxide, sulfur, argon, chlorine, and fluorine make up the rest. Sulfur dioxide endangers health and damages the environment. In the atmosphere, it combines with water forming sulfuric acid rain.