Warmer Hands (And Toes) Through Chemistry 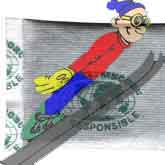 A popular item for skiers and snowboarders, hunters and people who have to work outside in cold areas, and found in many outdoors shops, are disposable hand warmers. If you haven't used them before, you're missing out on a cool way to keep your fingers and toes nice and warm. Warmers come in various shapes and sizes but all work about the same way. One simply rips open the cellophane bag, exposing the warmer to air and -- instant warmth, warmth lasting for hours. Put one in each pocket and keep those fingers from getting numb. They even have ones that fit in the soles of your boots. And some people even use them to combat the aches and pains of arthritis.

A check of the U.S. Patent Office reveals citations to warmers going back all the way to 1924. During the Korean war, Japanese soldiers used the same process to help keep soldiers warm in the bitter cold of the wartime battlefield. Metal canisters with warming powder were shipped to the battlefield where they were mixed with water to generate heat. After the war and after some refinement and product design, Japan became a mass producer of hand warmers. By 1988 they were producing 450 million units annually. So just how do warmers work?

Most warmers work through a simple chemical reaction similar to rusting that occurs when warmers are exposed to air. That is why keeping them under wraps until needed is a must. The warmer is a mixture of iron, water, cellulose, vermiculite, activated carbon and salt. When the iron in the warmer is exposed to oxygen in the air, it oxidizes. In the process of doing so, heat is created. The salt acts as a catalyst and the carbon helps disperse the heat through the warmer. The vermiculite acts as an insulator, keeping the heat from dissipating too rapidly, while the polypropylene helps the air to mix with the ingredients while holding in moisture. The chemical reaction occurs slowly enough to allow the warmer to last for hours. But eventually all the iron is converted to iron oxide and the process stops. So don't expect to see hand warmers replacing central heating anytime soon. But for a cold day, this simple chemical reaction can do the trick.