What Is Coral Bleaching? 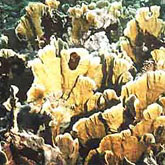 Certain types of stressors, such as increased sea surface temperatures or toxic exposures to oil, can cause coral polyps to lose their pigmented zooxanthellae, or to 'bleach.' Bleaching occurs naturally and is caused by various environmental stresses, including increased or decreased light, reduced salinity, or in the case of mass bleaching, elevated sea surface temperatures.

Bleaching can damage or kill coral, depending on the severity and duration of the temperature increase, and the sensitivity of the individual coral species. Corals can survive mild bleaching, as zooxanthellae have some ability to recover, but severe bleaching may kill nearly all the corals affected. Corals that withstand bleaching still suffer reproductive impairment, slowed growth, and decreased ability to calcify and repair themselves.

Recent widespread 'mass bleaching' events are thought to be a relatively new phenomenon. There have been six major bleaching events worldwide since 1979; the most severe to date destroyed an estimated 16% of the world's coral reefs in 1998. Hardest hit were reefs in the Indian Ocean, Southeast Asia, and the far western Pacific.