Word Power of the Very Young 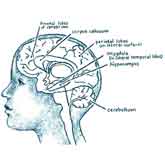 Before they turn 2, most children have a vocabulary of about 50 words. From 1st to 5th grades, according to some estimates, their vocabulary increases by about 30,000 words. That's 20 words a day! How can they do that? Part of the answer lies in the fact that they learn how to figure out what a word means, and how to create new words, without having to be told. Let's take an example.

Say you learn the word culpable. All of a sudden, a whole slew of new words enter your vocabulary in addition to that one: culpably, culpability, non-culpable, semi-culpable, and so on. You get the idea. Although we take it for granted, mastering these word-formation patterns is an impressive feat, allowing us to understand and produce words that we've never even heard before. It's a skill that children learn gradually, after they begin to acquire a vocabulary and master the syntax of the language.